The dangers of harmful microbes have been very evident this year as the COVID-19 pandemic has progressed. Health and Safety routines are now at the forefront of everyone’s minds especially when returning to the office.

As one scientific article notes, "Surfaces represent an important way of transmission to diseases since they can act as a reservoir of microorganisms that may spread to whoever contacts with the

The challenge with office safety is the persistent growth of what is called biofilm on surfaces such as door handles, printers, copiers, and other equipment. Biofilm is defined as a community of microorganisms and sometimes fungus that exist together within a slimy, protective film that also sticks to surfaces. Biofilm's colony of harmful microorganisms can grow exponentially fast. In just 30 hours, a biofilm community can explode from just a few microorganisms to more than 400,000.

This rapid growth makes effective cleaning of surfaces a challenge. Biofilm grows quickly, often before another cleaning cycle can be completed.

Your office presents its own potential points of surface contamination. Consider the following scenarios:

Antimicrobial surfaces, also known as self-disinfecting surfaces, offer a revolutionary answer to this challenge. The surface itself kills bacteria and prevents their regrowth without the need for constant, active cleaning. 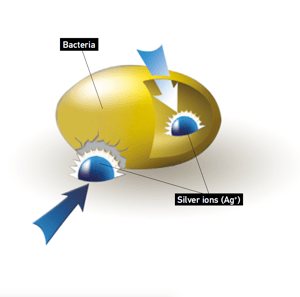 How does antimicrobial film work?

Antimicrobial film is a plastic film with anti-bacterial and anti-viral properties. It is applied to surfaces much like a transparent antibacterial tape that sticks to the surface without affecting the appearance or performance of the surface.

These silver ions are distributed evenly throughout the polymer in order to effectively disinfect the entirety of the desired area. Together, the antimicrobial agents and polysaccharide polymer kill the biofilm and prevent its regrowth, even in the absence of active cleaning.

Using an antimicrobial film on your office surfaces is a smart way to ensure the health and safety of everyone in your office because it is less expensive, less time-consuming, and more effective than standard cleaning protocols.

What is PureZone Antimicrobial film? 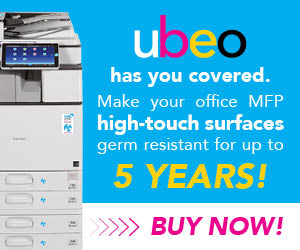 PureZone is specifically designed to interrupt the biofilm matrix and bacterial cells in order to:

It works through the power of silver ions, which form when silver atoms lose an electron and become positively charged.

The protective power of PureZone doesn't stop at eliminating the biofilm. The film is self-disinfecting without any external stimulation, thanks to the microbe-disrupting power of the silver ions that prevents the regrowth of the biofilm.

As a result, this antimicrobial film creates a self-sanitizing surface 24/7.

One downside to many cleaning solutions is their harmful environmental effects if misused or accidentally ingested. PureZone antibacterial film, on the other hand, is safe to humans and the environment. Antimicrobial, antifouling, and self-cleaning, PureZone is the next step in office safety.

Because PureZone anti-microbial film proactively prevents the regrowth of biofilm, you do not need to clean endlessly around the office. That means you can free your staff up to pursue other projects, all while maintaining the highest levels of cleanliness and safety.

By rapidly eliminating up to 99.9 percent of germs within an hour, and then maintaining the cleanliness of the surface, anti-microbial film is more effective than regular cleaning. No more worries about the biofilm growing back or germs multiplying on surfaces in between cleanings.

How long does antimicrobial film last?

One of the benefits of antimicrobial film such as PureZone is the long-term surface protection it provides. Not only does this self-cleaning antibacterial film maintain the cleanliness of the surface in between cleanings, but it remains effective for years. PureZone in particular will last for up to 5 years, or 350 cleanings with a heavy solvent.

PureZone's long-lasting nature means you don't have to pay for constant cleanings of your equipment or replacements of the film. Simply apply the film and enjoy years of low-maintenance protection.

Where can antimicrobial film be applied?

Antimicrobial self-cleaning film can be applied to any surface where a microbe shield is desired. Example of the places where you can apply this self-cleaning plastic wrap include the following:

You can even apply this film to any touchscreen, such as point of sale registers, because the film does not interfere with the function of the touchscreen.

With UBEO, you could be providing employees and customers with a revolutionary way to eliminate microorganisms and promote ongoing health and safety for years to come.

© Copyright by UBEO. All rights reserved.